Over the past few months filmmaker Bill Newsinger has been in and around Leicester Print Workshop, filming and documenting the lithography process. This film is the end result.

Working with Bill has been a pleasure – a funny, strange and intriguing process, with his endless enthusiasm for the subject matter always shining through.

From the start we both seemed to have a similar vision of how we wanted the film to come across, and I’m so pleased with the end result. The film portrays the lithography process exactly how I see it, and will hopefully help those who watch it to understand exactly what the process involves, and why I love it.

Big thanks to Bill for having the idea in the first place and being so cool to work with, to Leicester Print Workshop for being so accommodating and encouraging the collaboration, to West Yorkshire Print Workshop for allowing me the opportunity to take up the internship, and to Serena Smith for teaching me everything I was doing in the film!

I’ve been a bit quiet on the blogging front recently, so to make up for that I’m planning on doing a good few posts over the next few weeks to try to catch up a bit!

This post documents my first go at colour printing from a stone: 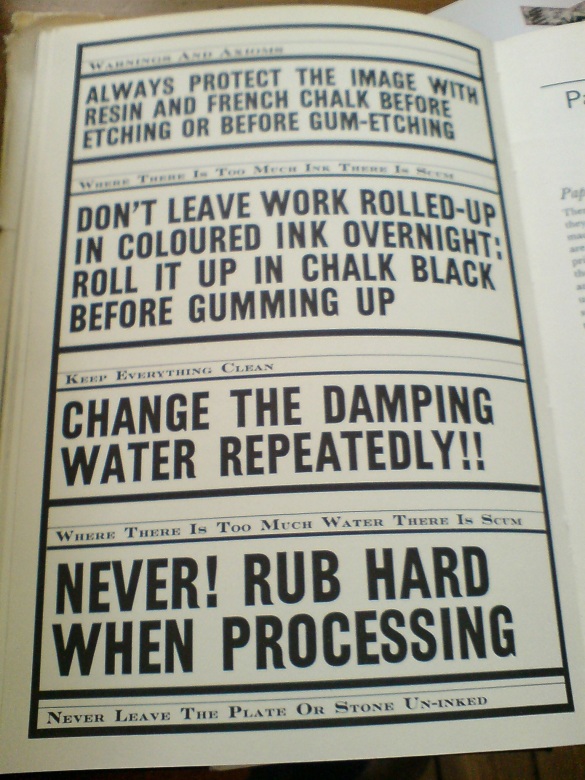 Some sound advice from Peter weaver in ‘The Technique of Lithography’ 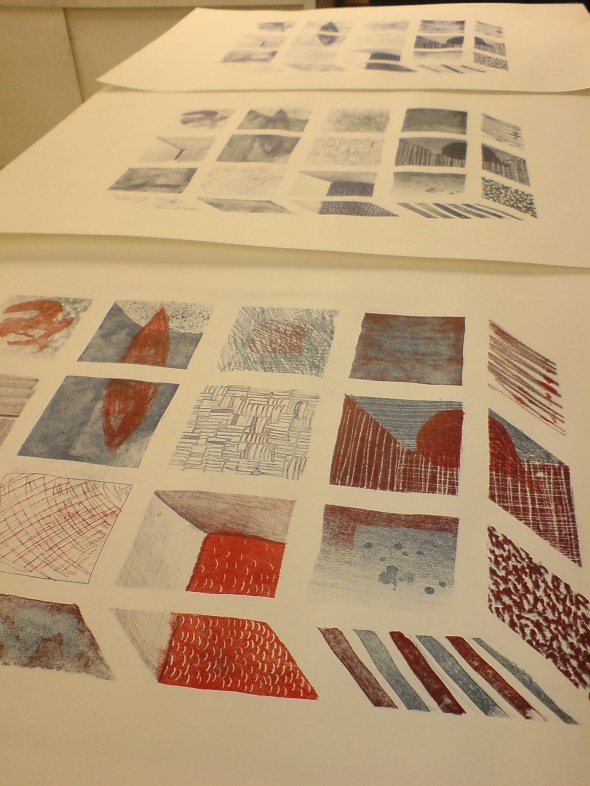 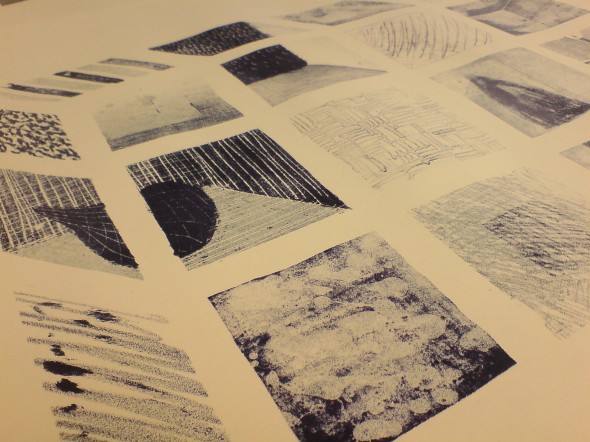 The re-worked test stone printed in register on top of the original stone. 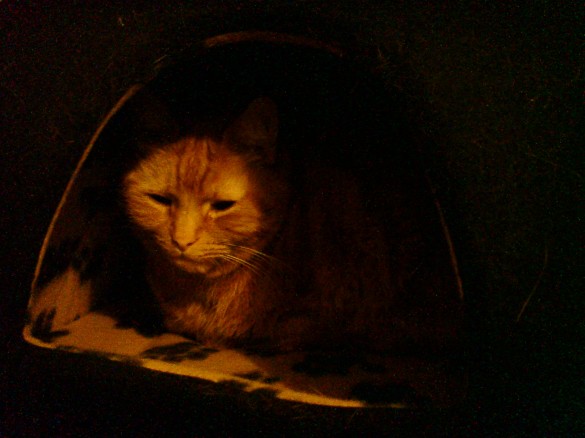 Morris the cat in his house. 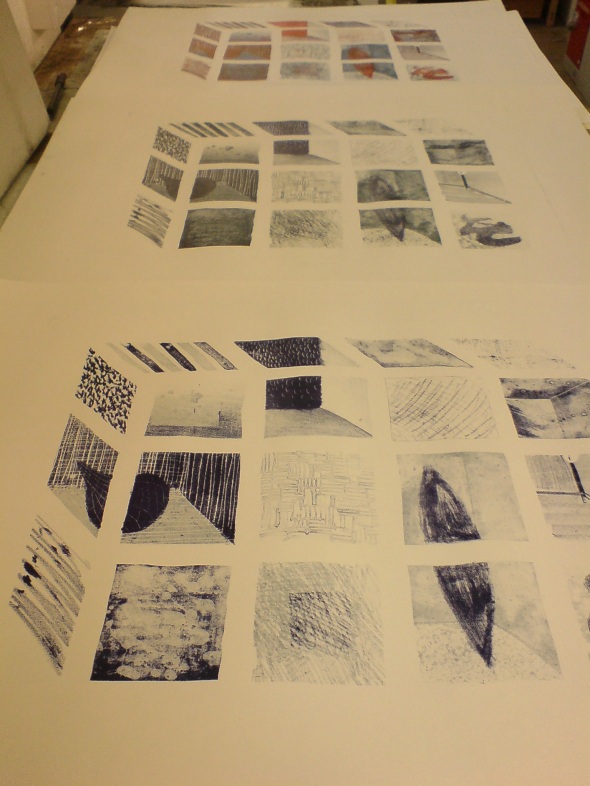 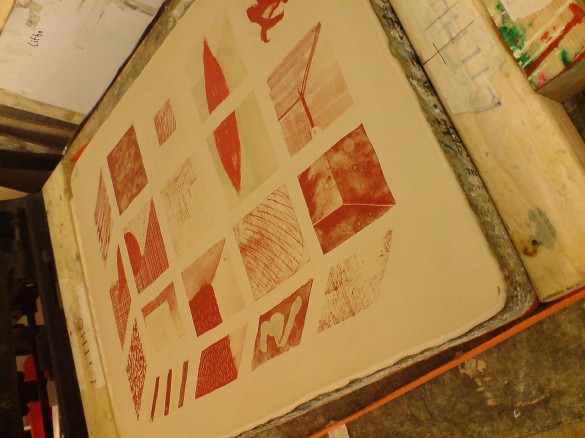 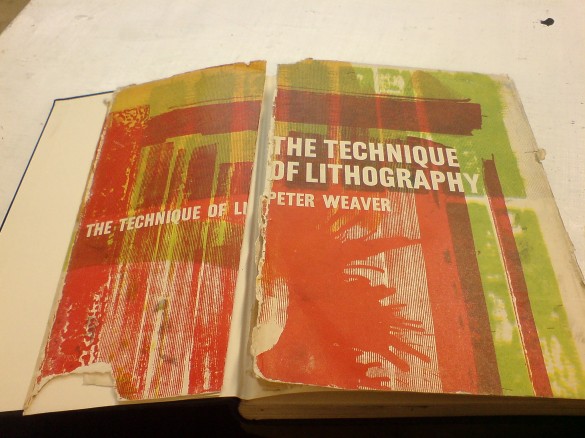 I’ve gone a bit off-track with my posts of late – excitement about artist books took over for a bit there! So back to lithography. I’ve got a backlog of posts about various processes I’ve been learning. So here’s the first – printing my very first litho stone. (This was actually over a month ago now – how time flies!). 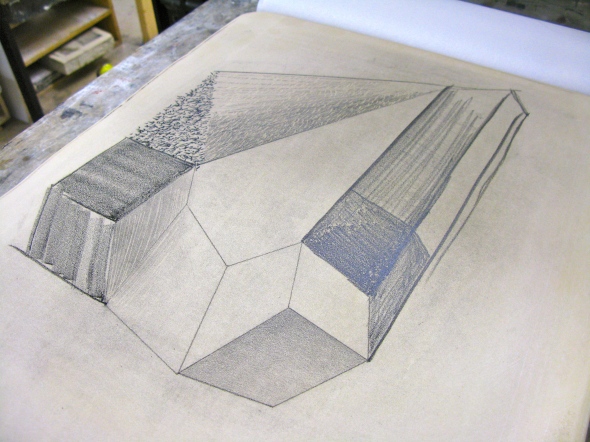 The drawing on the stone was made using hard and soft litho crayons and rubbing block. Unfortunately I forgot to document the processing of the stone – I’ll have to do that with another one. When it came to taking the first prints, I was amazed by the amount of detail the stone retained – it was so true to the original drawing, but after a few more the image started to fill in in the non-image areas, and it was evident that the stone needed some more etching, (despite having had two gum etches already). This is in order to de-sensitise those areas to grease, so that when the oil-based ink is rolled on, it only adheres to the greasy image-areas. 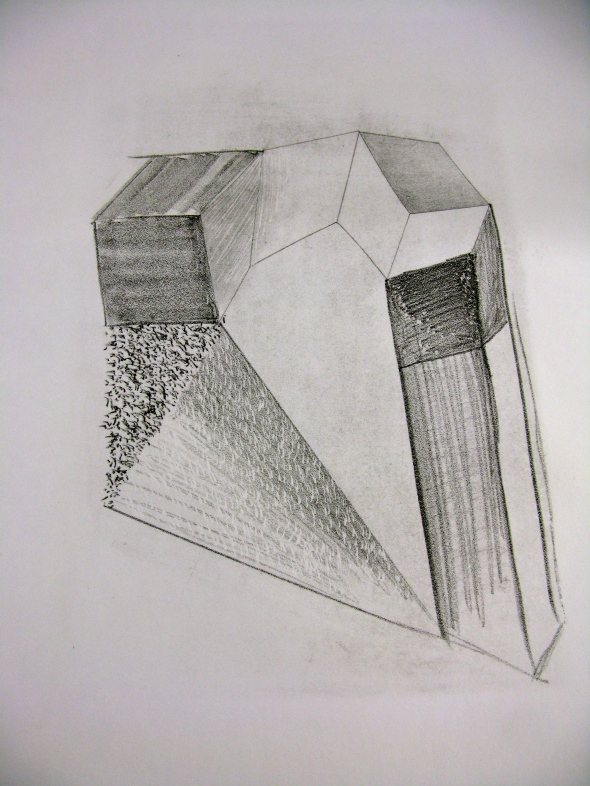 Stone filling in – evident from the grey tone on the non-image areas. This is why it’s important to really look at and try to remember your image before processing and printing, so that you know which marks should and shouldn’t be there. 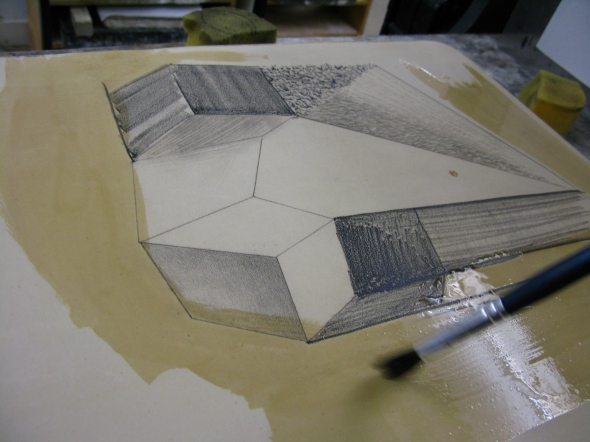 Applying a further gum etch to the stone with a paint brush. A strong mix of gum arabic and nitric acid is applied to the strong areas of the drawing and non-image areas to clear out any grease, and a weaker mix is used for delicate areas of tone, so as not to clear these areas out completely. 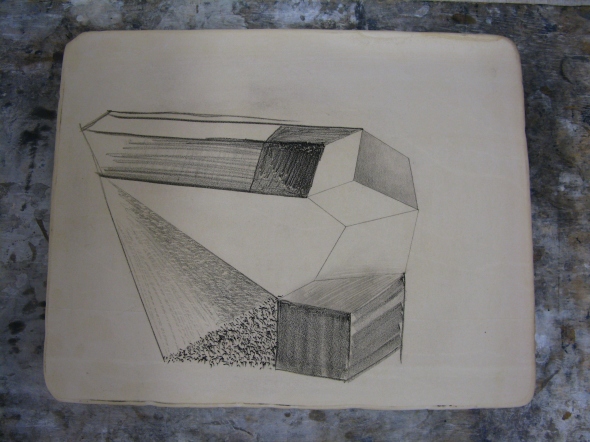 Stone etched back and ready to proof again. 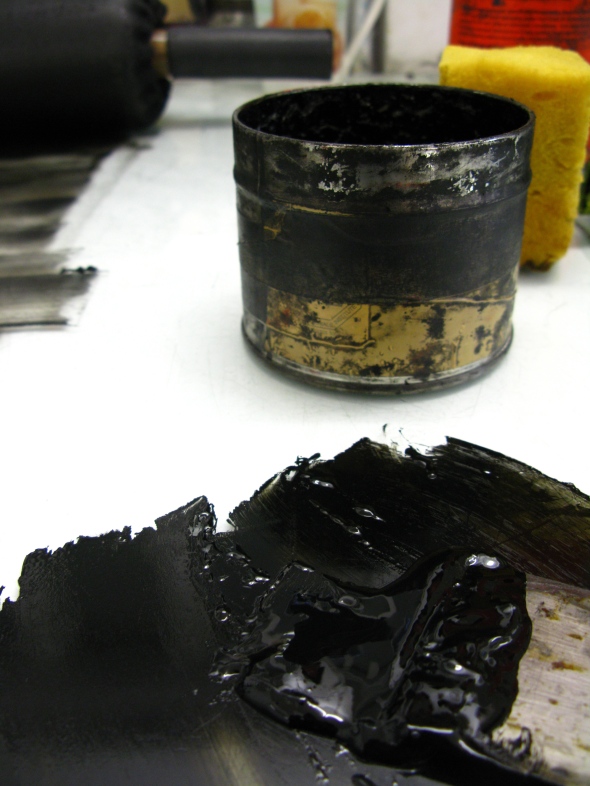 The stone is printed with a 50/50 mix of ‘Noir a Monter’ (non-drying black ink) and Crayon black ink. 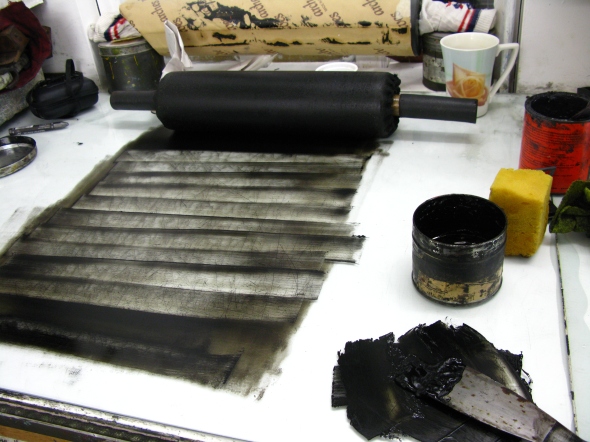 A leather nap roller is used to roll the ink. When using any black ink other than non-drying, the roller should be thoroughly scraped after use to avoid it drying out and ruining the roller. 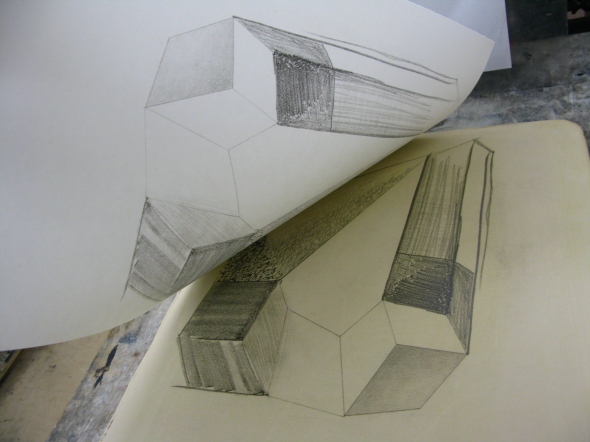 Pulling a print from the stone – Ink is rolled on to the damp stone, damp paper is placed on top, and once run through the direct transfer press the paper is pulled from the stone to reveal the printed image. 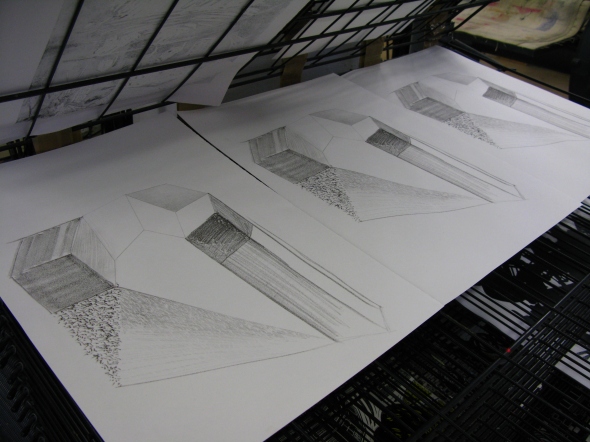 My first run of lithographs! I was really happy with how they turned out – especially seeing as they were only a test. 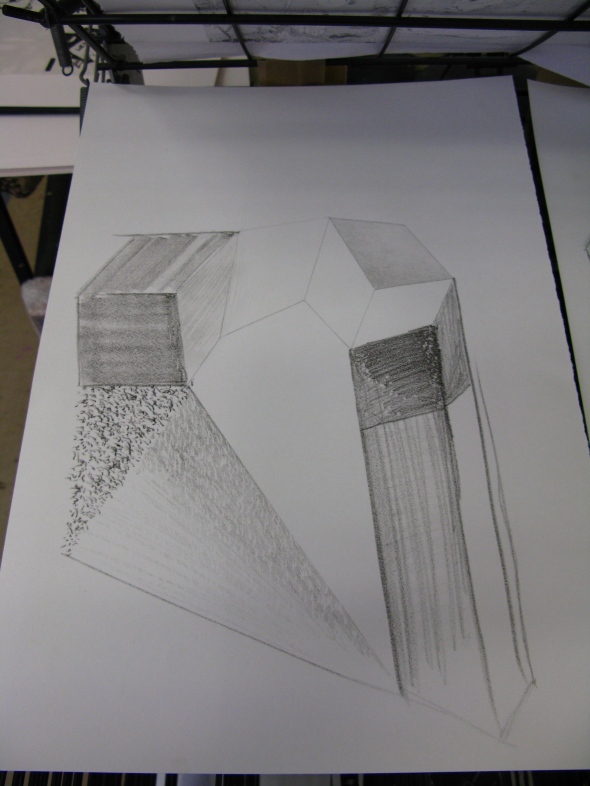 So amazed by the fine detail – something unobtainable with any other print technique. The key is processing the stone so that all the subtleties of the drawing are retained. 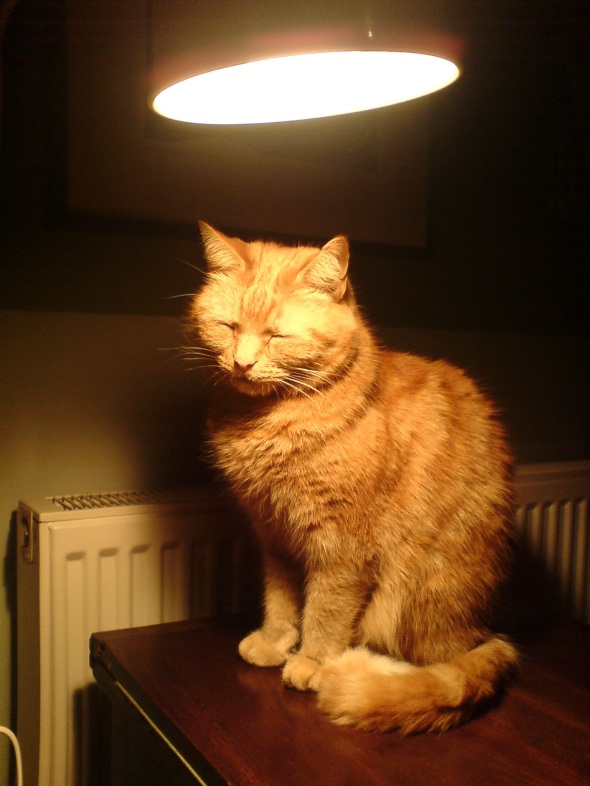 Morris under his favourite lamp.

Week two learning lithography – Photo-litho test plates and drawing onto my first stone. And a cat called Morris who likes to sit in the kitchen sink. 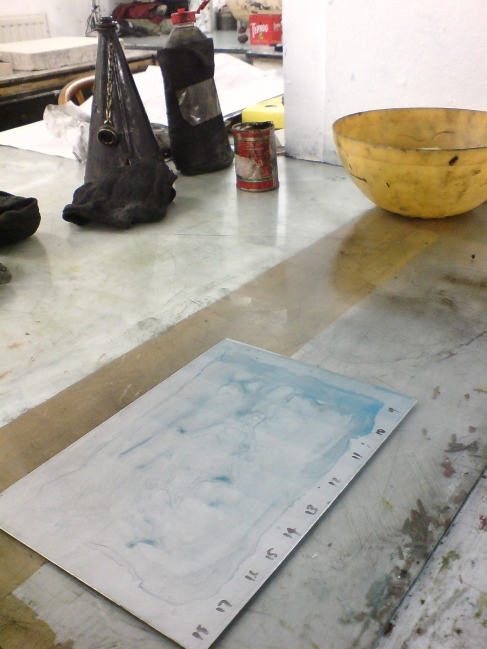 A test plate exposed to an ink wash on drafting film for varying amounts of time, ranging from 9 – 18 light units. Very much like photo-etching in that the longer you expose the plate, the lighter the image becomes. But SO much more detail than photo-etching, and no need for aquatint or halftones as these plates produce continuous tone because of the way they are printed. 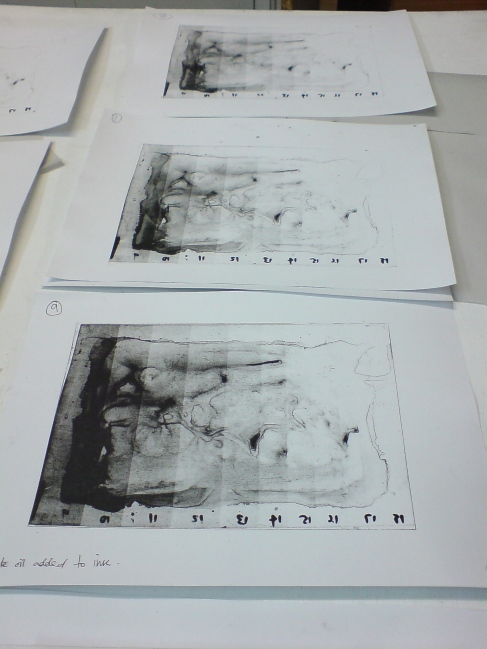 Resulting prints from the test plate. Due to the nature of the printing process, more detail is revealed from the plate the more prints are taken – showing here the first print taken above, and the 9th print taken below. 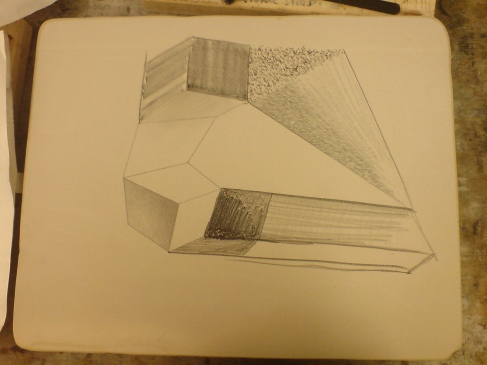 My first drawing onto stone, experimenting with dry drawing materials such as litho pencils and crayons and rubbing block to create subtle tones. We also put a first gum etch onto this stone, so it will ready for it’s second gum etch next week. 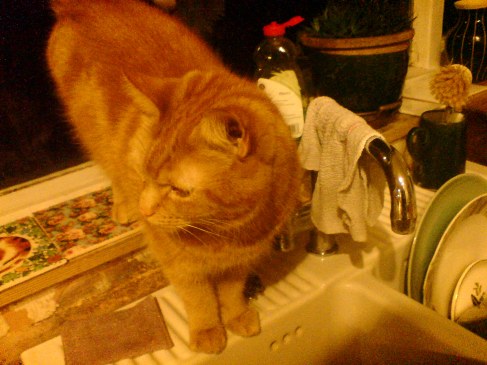 New beginnings and the formation of ideas.

This week I started my post-graduate internship at Leicester Print Workshop. It was a busy couple of days, and I felt as though I absorbed a massive amount of information in such a short space of time, so looks set to be an intensive year, and I can’t wait!

Seeing as this is a bit of a new beginning for me, it has brought me back to some ideas I was mulling over at the end of last year, but never got the chance to post about, about how a piece of work begins, or how an idea forms – another recent topic of conversation at the print workshop.

For me, it has always been a kind of intuitive thing. But talking to other artists has brought to light that fact that every individual goes about it in a completely different way. This may be pretty obvious, but its not really something I’ve thought about in much depth before, and its made me examine my own way of working in more detail. I wanted to try to describe how an idea forms for me – just to see if I could articulate it in a comprehensible way. Without a better way of describing it, an image tends to appear to me, (not by some divine light shining down through the clouds – it’s usually very mundane). This could be sparked by anything – a throw away comment someone makes, a song lyric, a sentence in a book, a texture on a wall, the way one piece of furniture might sit compared to another, or a conversation which seems to recur coincidentally time and time again. This then tends to result in a fairly clear image of the piece of work I want to create, although inevitably that image changes through the subsequent processes of sketching, mock-ups, proofing, etc, often resulting in an outcome which is totally different to that which I intended.

In contrast, I was talking recently to a couple of artists who work rather differently – without any clear image of how they would like the work to look. Instead they let the materials and marks on the paper, or brush strokes on the canvas, guide them through the image-making process. I really admire people who can work like that, and I think it can add a sense of freshness and vibrance to a piece of work, and prevent work from going stale.

In contrast again, I know some artists who have a very rigid idea from the start of the piece of work they want to make, and do not deviate from this original idea and see it through to the end. This I also admire, as it involves a determination and blinkered vision which I’m not sure if I possess.

In short, I think it’s really important for an artist to be aware of how and why an idea forms, and to consider the ways in which that idea could be best interpreted and fulfilled – whether to stay true to the original vision, (if there is one), whether to deviate and explore alternative avenues, or whether to start from scratch and let the work grow organically. This also harks back to my previous post about working within the constraints of a particular medium.

These are definitely ideas which I’ll be considering throughout this year, and I am really excited to see how the lithography process will influence my work.

I started off this week learning about photo-lithography, and below are the resulting prints from my first ever photo-litho plates. Ok so I think I need a bit more practice! 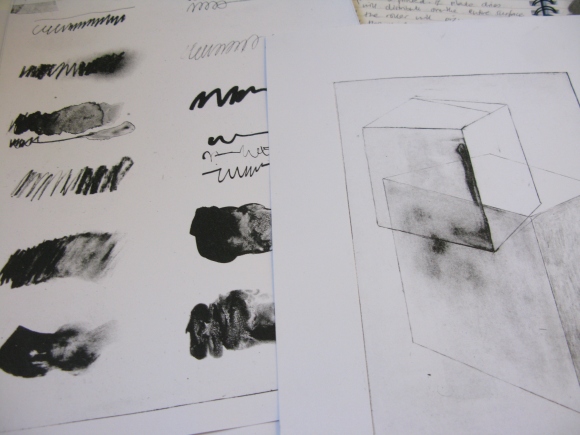 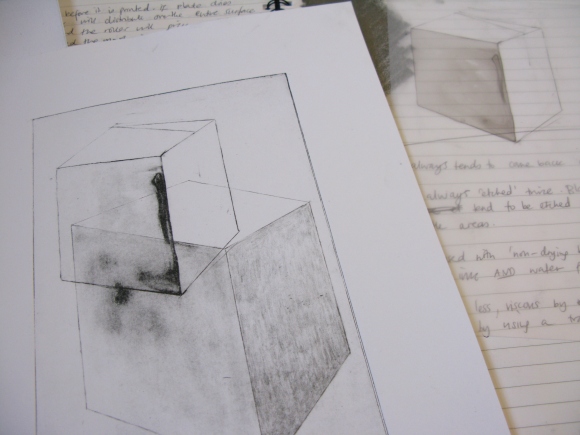 So I’ve got a bit of news – in January 2013 I’m going to be starting an Internship at Leicester Print Workshop in Stone Lithography! It’s one of the only printmaking processes I’ve never had a go at before, and I’m really excited because it’s one which relates the most, in my mind, to drawing. One of the things which made me apply for it was doing a print swap recently with artist Lisa Hecht. I sent her one of my artists’ books – ‘Corners’, in return for her beautiful lithograph ‘Blue Damask Bed’, (above – sorry for the not-great photo). I think it’s actually a photo-lithograph, but it was the quality of the print which captured my attention – the way the ink sits on the paper is different to any other printmaking process, and the layering and colour really inspired me.

Over the past few days, as the news has had a chance to sink in, and as I’ve been in the process of editioning my print for this year’s 20:20 print exchange, I’ve been thinking about my last blog post, and what I said about choice of technique to suit the idea being a large factor in the success of a print. I still think this is very important, however, there is something to be said for working within the boundaries and constraints which a particular technique provides, whether it be drawing onto stone, carving into wood or lino, or etching a metal plate. This seemed particularly relevant as the print I was editioning was a very small, simple hard-ground etching which I made a while ago, as a tester for a series of small etchings of items of household fixtures and fittings. The drawing sits just within the boundaries of the metal plate, confined, almost restrained by it. But there is a certain domestic comfort in that. 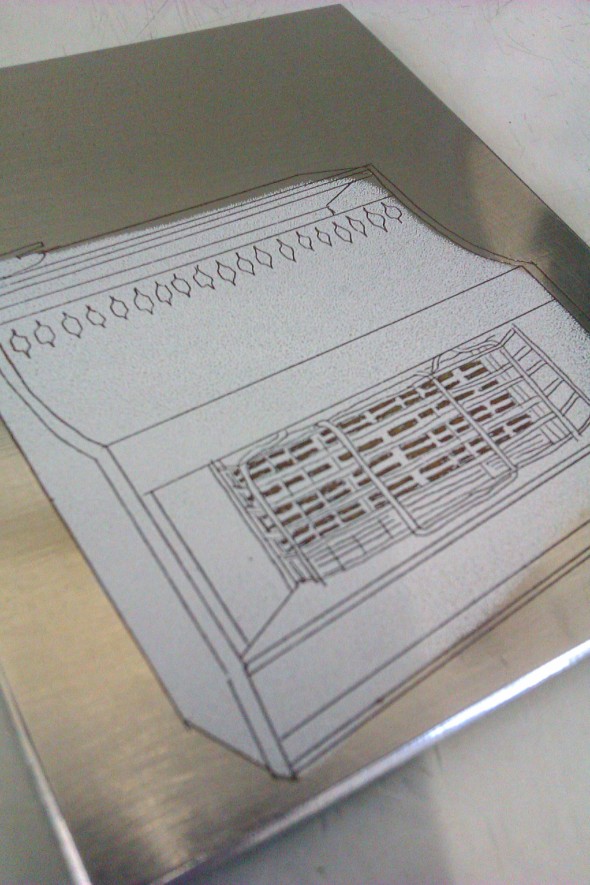 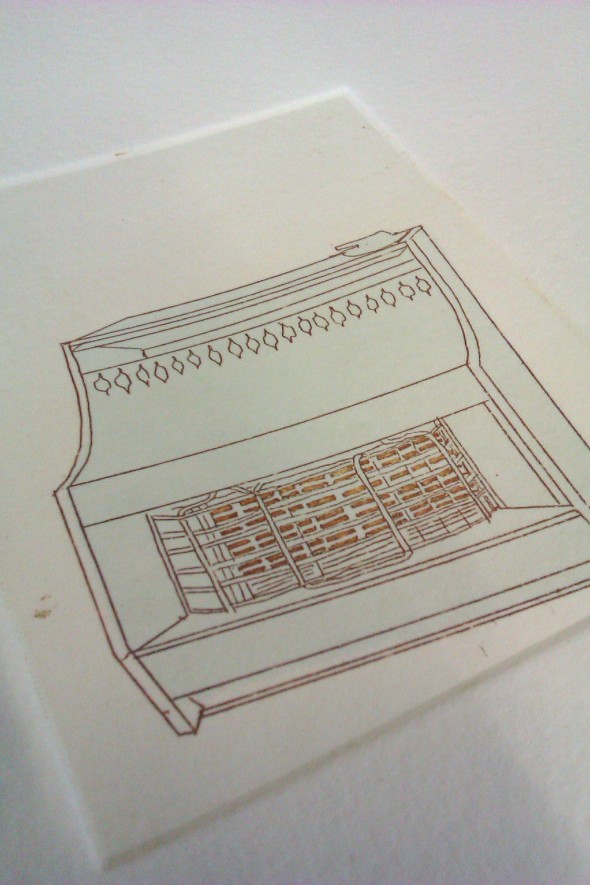 The finished print, hard-ground etching on zinc, inked in yellow-brown with a colour roll-over and printed on off-white hahnemuhle paper.

It might be that an artist chooses a particular technique for the very reason that they want to be constrained – they want the process to determine the outcome of the work, to take them on a journey. The outcome may not be one which is expected or anticipated, but that’s what makes it so exciting! Printmaking for me is a constant process of inquiry, discovery and repetition, and the more I learn about it, the more ideas for new work I get, so I’m proper chuffed to have this opportunity to develop my skills further!

I’ll be posting regular updates on here from January detailing the progress of the internship, so keep checking back!

Shop for hand made prints in my Etsy Shop: Middleyardprints

I am a visual artist and printmaker based in Leeds, West Yorkshire. I also work as Print Technician at West Yorkshire Print Workshop in Mirfield, and teach courses and workshops in various printmaking techniques. 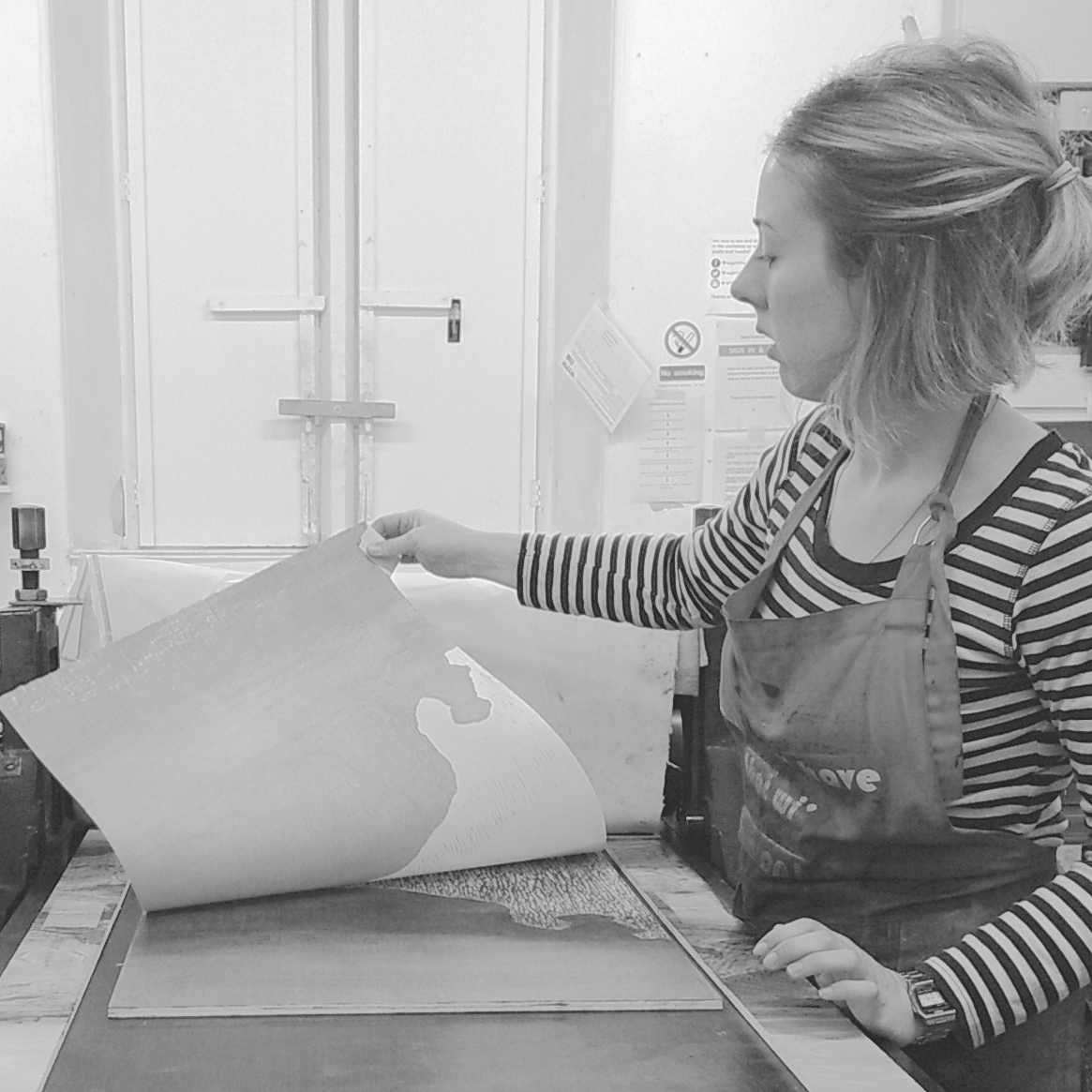